ROME, Ga. — There’s never been another drive-in like this.

“Many events and most air shows have been forced to cancel during the pandemic,” said John Cowman, the show’s organizer. “My team and I have worked diligently with local and regional officials and authorities to find creative and safe ways to host this year’s air show and avoid cancellation. We transitioned to a drive-in air show model that fully satisfies the wide range of safety concerns while allowing us to bring exciting entertainment at a family-style venue to the residents of the tri-state area. We believe this is the ‘shot in the arm’ our community needs right now, especially during the fall, one of the most beautiful times of the year in our area.”

To provide a safe environment for air show attendees, the 2020 event will utilize a drive-in format for the air show, offering spectators a mix of social distancing while watching some of the top military and civilian aviation performers.

Russell Regional Airport will be transformed into a giant drive-in style parking lot for the event. Tickets must be purchased in advance. None will be sold onsite during the show.

Each car will be assigned a 10′ x 20′ space for the vehicle with an adjacent 10′ x 20′ private space for tailgating. The single front row spots will have an additional 100 sq. ft. of space. Guests are allowed to bring their own chairs, tables, non-alcoholic beverages and food. Beverages and food will also be available for sale on-site. Attendees must remain in their assigned parking spot unless using the restroom or purchasing food or beverages.

The Thunderbirds will serve as the headlining and final performers on Saturday and Sunday in their six signature red, white and blue F-16 Falcons. The USAF Thunderbirds are internationally known for their hard-charging demonstration of precision formation flying, pushing their F-16 “Fighting Falcons” to the limit. Known as “America’s Ambassadors in Blue,” the Thunderbirds have traveled throughout the world performing before millions of spectators. The U.S. Army Golden Knights and the U.S. Air Force A-10 Thunderbolt II Demonstration Teams will round out the lineup of military performers.

Opening ceremonies will begin each day with the U.S. Army Golden Knights Parachute Team. The elite group of skydivers will launch the start of aerial performances during the national anthem and will later return for a full demonstration highlighting the skill and expertise of the world’s top military parachutists.

ROME, GA — Education is soaring to new heights as the Tiger Flight Foundation teaches children to set goals and to take a more active approach in controlling their own life, both on the ground and in the air.

Classroom sessions and flights by several tiger striped aircraft are inspiring preteens and teenagers from Georgia, Tennessee and Alabama to find specific ways to work harder to better themselves. Tiger Flight is also introducing a strong interest in aviation to many preparing to enter high school.

“Leading the young to the dream of flight” is the foundation’s quest as the nonprofit organization steers young adults in becoming successful individuals and taking “command of their own lives”.

Based at the Richard B. Russell Airport near Rome, Tiger Flight’s roots began seventeen years ago as two metro Atlanta pilots looked to form a civilian flight team. The foundation has since grown to include a Formation Flight Team, an education workshop, and an aviation museum open inside a World War II hanger at the airport.

“We began in 2000 and the main purpose of Tiger Flight is really motivation helping boys and girls to become pilots in command of their own lives,” explains Robert Young, the foundation’s Chairman of the Board. “We use the airplanes as a hook to get them up in the airplane and to give them enthusiasm and excitement.”

The non-profit organization expanded from being a stand alone flight team to begin including discussions to motivate preteens and teens to take charge of their lives in 2006.

“Taking responsibility, believing in themselves, setting goals, measuring their results, putting a plan together,” states Phil “Sunny” Cataldo who realized the concept of adding the educational resource. “Suddenly, Tiger Flight became a children’s motivational program along with being a formation flight team.”

During an April visit, this aerospace reporter arrived at Russell Airport in time to see three orange with black tiger stripes Alon A-2 Aircoupes aircraft soar across the blue morning sky. On board each aircraft was a young adult interested in the possibility of becoming a pilot, or working as a student with the goal of an aviation career.

Rachel, an eighth grader who lives in Chattanooga, took flight for the first time through Tiger Flight and was thrilled by the experience on this spring morning, “Riding in the aircraft was very cool and enjoyable as we sped down the runway, and then my entire life changed — we were flying!”

Rachel joined fifteen fellow young adults who flew that day, and added that she would love to fly again. Young adds that several of the pilots visit classrooms across north Georgia as they give their Pilot in Command motivational talk to inspire children new to aviation.

The flight team performed during the Thunder in the Valley Airshow in nearby Columbus in April, and will prepare soon for their annual participation in October’s big airshow Wings Over North Georgia located at their home airfield.

“We do several air shows a year, and we invite the public to come up here,” Sunny states. “We will have a routine as we perform a few passes over the airfield.” The Tiger pilots traditionally perform the Missing Man Formation during airshows as well as execute several tight wing-to-wing formations during their show.

Weather permitting, Sunny and his team will be poised next to their aircraft on May 13 to talk one-on-one with the public about the foundation, and to answer questions about their formation flying.

The pilots volunteer their time and their airplanes to Tiger Flight in support of the foundation, and Sunny adds that none of the money raised goes toward the aircraft but toward the education they provide. 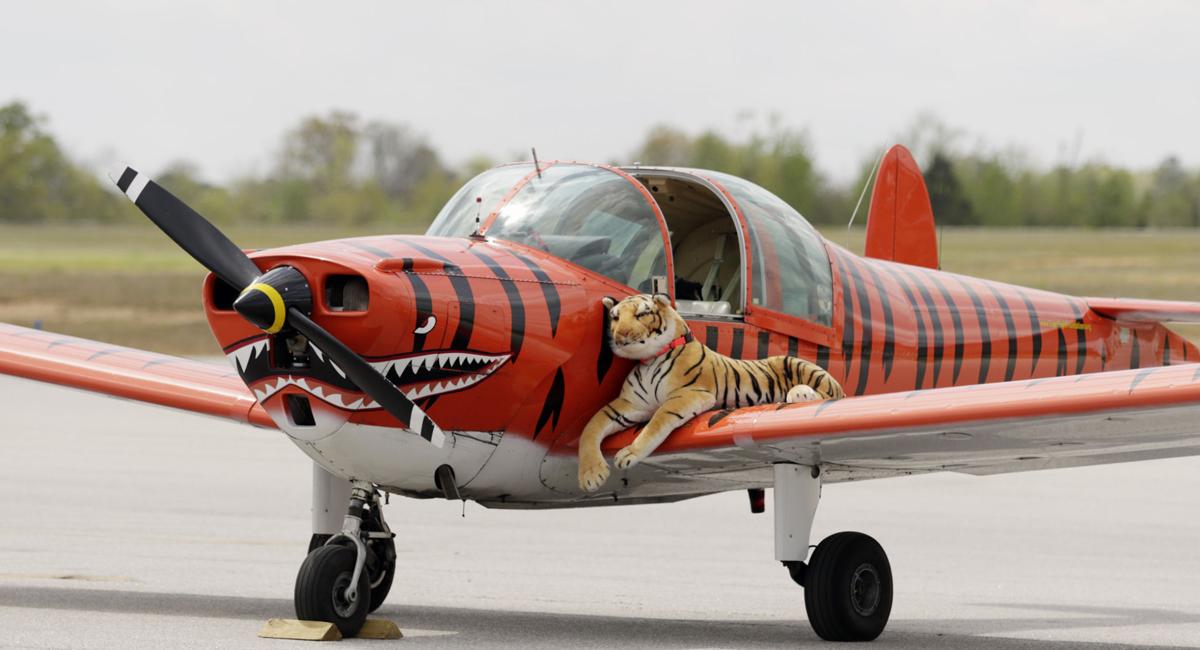 Anyone watching the skies above Auburn on Thursday may have seen a strange sight — flying tigers.

Three planes from the Tiger Flight Formation Flight Team landed at the Auburn University Regional Airport to refuel on their way to the Marvel of Flight fly in and expo in DeFuniak Springs, Fla.

The three Alon A-2 Aircoupes are painted with tiger stripes after the nickname of the military version of the plane called the “Twin Tailed Tiger.”

The three pilots flying the planes, Phil Cataldo, Dave Johnston and Joel Megginson are part of the Tiger Flight Foundation based at the Richard B. Russell Airport in Rome, Ga.

The non-profit group performs formation flying techniques at air shows or ceremonial fly-over’s and works to teach children about aviation, according to Cataldo.

More information about Tiger Flight is available on their website www.tigerflightfoundation.org.